What is it to be a medieval executor for a day?

A real-life story from old times.
ByGeorgi Mandichev
November 29, 2020
The history books are full of many examples of the lives of extraordinary emperors and powerful kings; bold knights and noble heroes. However, there are not that many stories of those who live in small medieval villages. Together with regular activities such as harvesting, and going to church, a significant part of medieval people's lives were related to religious traditions and even attending executions and punishment procedures. In this Youtube video, we have an inspiring story from the diary of Franz Shmidt, an axeman from Nuremberg.
Our character kept a detailed description of his life until his death in 1634. And based on his testimonials we know some juicy details from the daily life of a medieval executor. He was performing a more significant role in society serving also as a medical professional and a spiritual guide. They also had the duty to offer help to the condemned and ask for mercy before God in their last minutes on the Earth. Together with this, the job of the executor has two very important meanings for medieval society: shocking the spectators and have a preventative power as they have to affirm the divine and human authority in front of the public.
The story of Franz is fascinating: he inherited the craft from his father Heinrich in the small city of Bamberg; and after 4 years working under his supervision Franz decides to move to Nuremberg. Besides the strong condemnations, he was able to perform also "small" duties such as amputations, clogging, taking out criminals with a sword, burning, and on the breaking wheel. 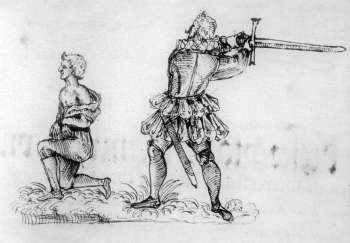 The diary offers us the opportunity to picture the first execution performed by Franz Shmidt in his new own Nuremberg on August 13th, 1577 when Franz had to deal with a man named Hans Vogel.

Before performing the actual gallows, the axman is the one who has to get to know the victim and in case he is ill, to help him. The next step in the procedure is the clergy visit so do the victim has the opportunity to confess their sins and ask for forgiveness in front of God.

After the last meal chosen by Hans, the jury awaits the prisoner. The jurors consult and choose the type of execution and the sentence of Vogel is a fact: he should end his life with a sword. In front of the numerous crowd, Franz needs only one attempt and his first mission in Nuremberg is accomplished.
More History 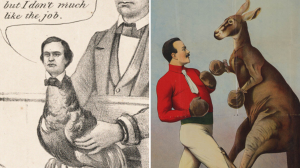 How Savage Was 19th Century Comedy?
More savage than you think.