If you're looking for a freemium collectible card mobile game, O&C Duels will provide one of the most fun experiences out there.
ByOMG.ROCKS
August 4, 2020

It is a very fun and satisfying game to play on mobile with an enjoyable single player campaign. Note the multiplayer game has most of its players maxed out (already farmed all of the legendary cards) and it is very tough to compete with them unless you're willing to invest thousands of dollars into the game's lottery system.

You'll need to pick a hero to start off your game. There are sixteen heroes in the game. Below are the best choices for new players. 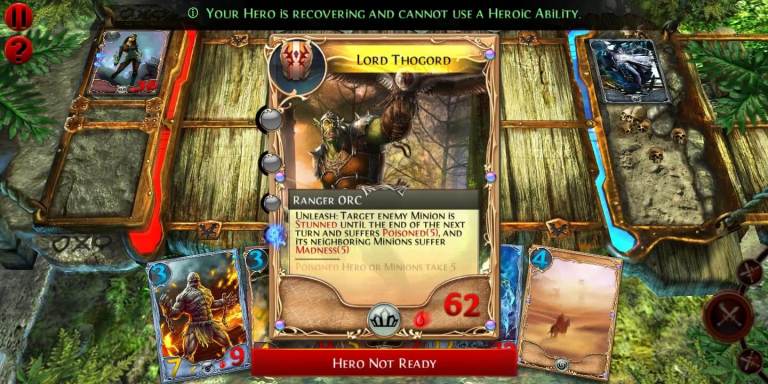 This hero's abilities allow some amazing crowd control. They will save your skin more than once by stunning that particularly strong card your opponent was hoping would ruin your day, then poisoning them for a massive 5 points every turn.

On top of all this, that card's neighbours receive "madness(5)", which means those cards will hit their neighbours to their left and right for 5 damage each time their turns come up, potentially causing the main card you've targeted a whopping 15 damage every turn on top of a stun. 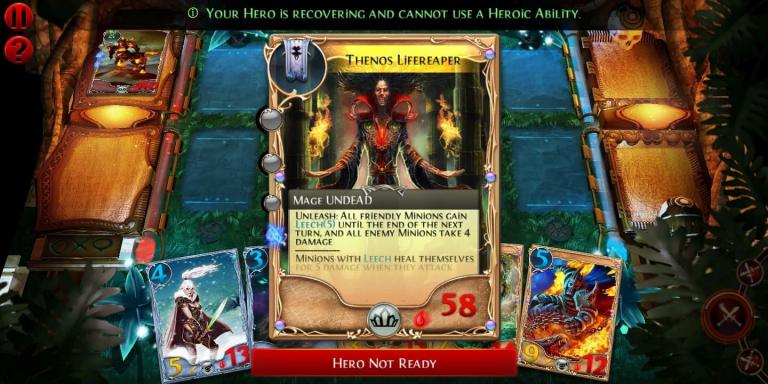 Thenos Lifereaper's hero ability is quite overpowered, as it does not only deal up to 20 damage to the whole enemy board but it can also heal your guys up to 25 hit points in total. This will cause your opponent to drop whatever plans he had for that turn and rethink its strategy.

Once you've chosen your preferred hero, you'll be given a standard deck to begin your campaign with. Don't worry, you'll fill out your deck soon enough with new cards awarded to you through the single player campaign, and enough opportunities to win new cards through the lottery system.

Combat takes place in turns. You have the usual setup of 5 drawn cards from the deck giving the options to sacrifice one card for an extra point of mana, place as many cards as you want on the board, cast spells or equip gear on your hero.

The AI will almost always position cards from left to right, unless otherwise scripted or it is reacting to one of your played cards.
Use this knowledge to your advantage by positioning your card to hit the opposite card before they hit you, as most cards have to wait till the next turn to activate and attack, unless otherwise specified.

Meanwhile, your exposed positions will cause your hero to take a few blows in the beginning but his high HP compared to most cards (and beginning battles) ensures this will not be a problem and you'll probably gain the opportunity to heal your hero soon enough. The image above shows your hero's cards (at the bottom of the board), which will deal 11 + 3 + 3 damage to the enemy hero at the end of this turn, by having positioned those cards to occupy spaces where the enemy had not deployed cards on the opposite side. Our hero would receive 13 damage from the Dragon card on the top row, however the card on the right-bottom side of the board is Fallen Lord Esteros, which has the ability to block all incoming damage to your hero.

You will have monster cards, spells that give damage, buffs/debuffs, enchantment locations/traps, and hero gear.

Monster cards are your most important cards to own, as they protect your hero from being attacked directly. They have their own health, deal damage, and have their own abilities that include all the range of other cards.

This being said, do not ignore the other card types. They cost less mana to activate and can offer great advantages against your opponent.

Listed below are some must-have cards in your deck. Wyrmlord Tohil is a fairly common "Rare"-tier card to get in the lottery. His ability ensures he can withstand damage and keep an opposing card in a lockdown indefinitely, unless being removed by some powerful enemy spells. 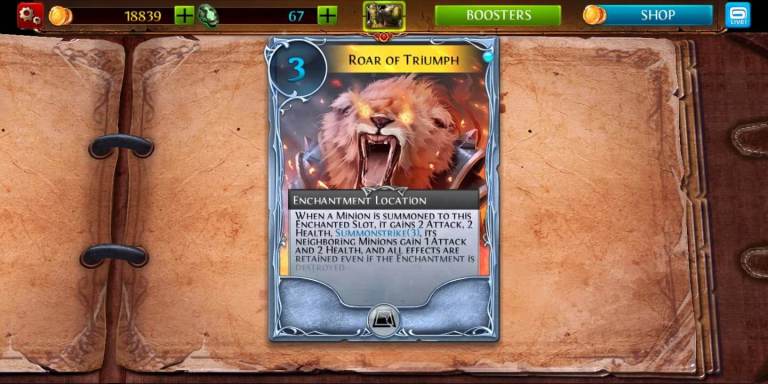 Roar of Triumph is perhaps the most powerful enchantment to place on your board. It will massively improve 3 neighbouring friendly cards and strike a 3 damage blow to the enemy card opposite its location. Moreover, the enchantment applies bonuses and gives damage every time a monster card is placed over it.

Tip: Don't waste this card by placing it on the edges of the board, as you will not get the full bonus to all the neighbours. 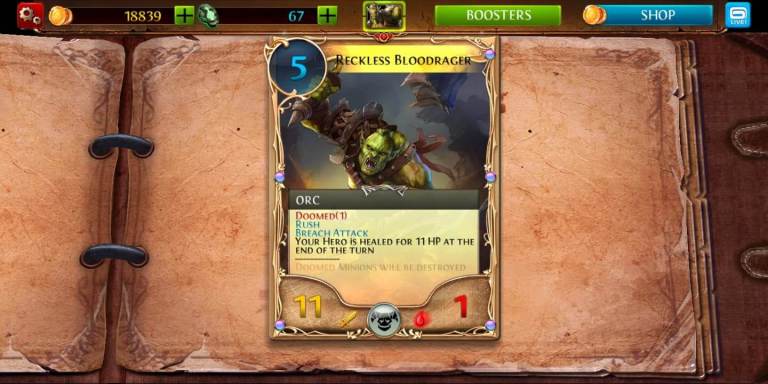 This is a monster card that works like an activated ability. It will deal a massive amount of damage to the opposing card in the turn it's being placed and heal your hero for 11 HP once its turn is over. Breach attack ensures that if the opposing card has less than 11 HP, the difference in damage is dealt to the enemy hero. Very useful to get out of tight spots where your HP is low or you need just a little extra damage done quickly to defeat the enemy hero. This wee card may not look like much but it has one of the best uses in the game. It's made to be sacrificed for mana. Fill your deck with at least 4 of these. They will pop up in your drawn cards ever so often and it gives a very good bonus when sacrificed: Leech. This means one of your monsters will now be able to heal when it deals damage. Combine this with a monster that deals damage more than once per turn and that card will become virtually indestructible. 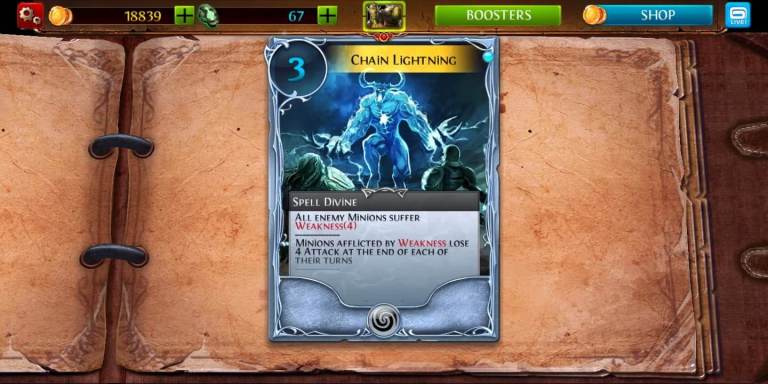 This is by far one of the strongest spells in the game. It will remove 4 attack from enemy monster cards every turn, forever. Don't worry if your opponent has kitted out his board with massive damage dealers. Just survive for a few turns and they'll become useless. Champion's Plate is the best piece of armor equipment in the game for your hero. It effectively reduces all damage received by 3. If for some reason the hero receives less than 3 damage, it will still heal your hero for 3 HP. Highly exploitable if you were to leave an opponent's 1 or 2 damage dealing enemy card free to attack your hero while you wear Champion's Plate.

Your deck starts with about 20 cards and can reach upwards of 50.

You draw 5 cards every turn. You will start out with a small amount of fixed mana, depending on some variables. Each turn you'll be able to play all the drawn cards, either monsters or spells or buffs or debuffs AND most importantly sacrifice one card to spend on getting extra mana. This is very important because cards cost mana to be placed on the board or spells to be cast.

Always keep some cannon fodder cards in your deck, about 10% to 20% of your deck that you won't mind sacrificing to gain mana faster than your opponent, which enables you to play more cards in later turns against them.
This is how you will win battles of attrition: more mana and cards that you can play against your opponent, while they struggle to place 1 or 2 cards each turn and can't deal with the constant onslaught. This is your deck editing screen. The row at the top shows all your cards that you share between all your heroes. The one below is for the hero you have currently selected.

Your most valuable resources are runes. You will get some free ones by campaigning, by logging in daily for a long enough period of time, and most fun of all, by defeating offline players! Sorry Antonio, but we need those runes more than you.

Once in a while the Pillage Players mode will find you a player that you can beat for runes. There's a bug that you can exploit where once you've found one player that drops runes, all subsequent players that are defeated will reap you the same amount of runes, even if their "You Can Loot" screen (shown above) only shows you'll get gold. So this is the best way to farm runes, which are used for playing the epic lottery, which will reap you the best cards in the game!

Besides the Lottery system, the game also provides a nice alternative in the form of "Alchemy" or "Synergy". This is where you can throw cards you no longer use in a magical pot of sorts and upon reaching a certain amount of points you'll be awarded with 2 or 4 new cards at random: Gold is nothing to shake a fist at though. For 50,000 gold you can play the mid tier lottery which will still ensure some pretty good cards.

Best farming point for both gold and XP is this boss fight on the campaign map here: Unlock the campaign map up to his point at least. 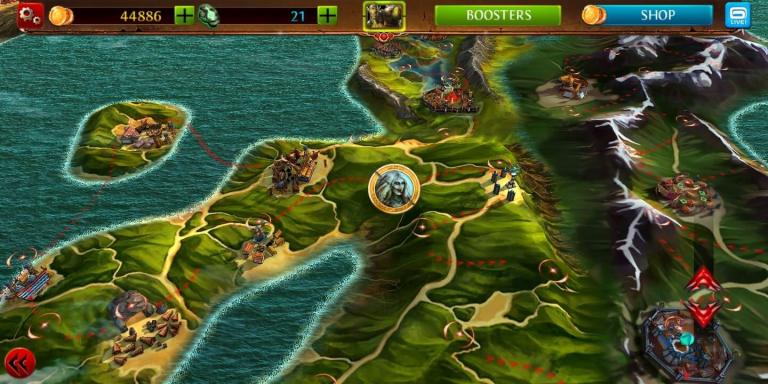 Akasha the Necromancer will be the first boss you encounter that should give you a bit of a struggle to defeat. But she gives a fair bit of gold per fight and if you use a medal of victory (costs 400 gold in the store) you can bump up your XP gain to 5670 for every battle.

Past Akasha, the next battles until the end of the campaign map will be quite a bit more difficult, providing a satisfying challenge to go up against. So make sure you follow the tips and tricks laid out above and you'll be set up nicely for the battles ahead! 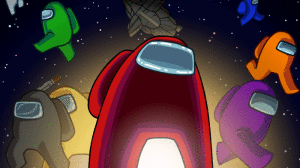 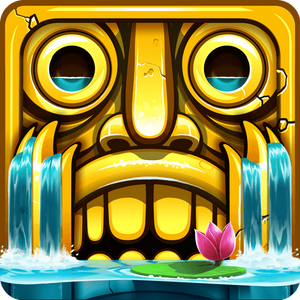 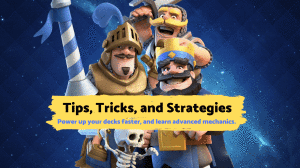 Clash Royale - Tips, Tricks, and Advanced Gameplay Strategies
Power up your decks much faster, and learn the most advanced mechanics of the game. 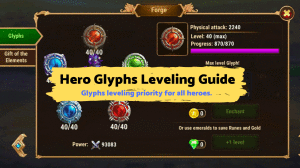