The blue hue of their skin doesn’t stand in the way of these ladies being exemplary.
ByOMG.ROCKS
December 2, 2020

scifi.bg
As you well know, skin color and planet of origin are simply details – the important thing is whether or not the creature in question is good or bad, what its values are, what its fighting for and how it acts in society. This does not mean, though, that some races wouldn’t be a bit more neglected than others. And since in normal movies female characters are usually white, of darker hue or Asian, and they are usually from Earth, we will turn your attention towards blue skinned peoples born on different planets. And more specifically towards their ladies.
This is not the first time we’ve made a ranking of sexy alien females characters but now we will concentrate on other qualities – dignity, good behavior, accomplishments and independence – generally traits which one modern day lady should have in order to be well respected.
So, here’s an example of a top 5 ranking of blue skinned alien ladies! Alas, as our choice of ladies with blue skin tones is fairly limited, we will have to start out from some real beasties and gradually reach up to role models for young ladies. That way we’ll cover the entire spectrum.
5

Nebula (Guardians of the Galaxy) 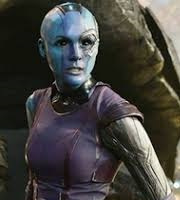 Gamora’s sister is definitely not exemplary in terms of good behavior. She carries an anger deep within, driven by the fact that her father, Tanos, favors her sister as more capable and thus his favorite. Nebula has a hard time controlling her emotions and this often gets in her way. Nevertheless, she is a brutal murderer, which is good for her. Fortunately, over the course of time she finds out that there’s no point in pleasing her father or being angry at her sister.

In fact, she plays into the good guys team and her values evolve thanks to the irresistible charm of the Guardians of the Galaxy and the Avengers. We’re sure that if the third movie doesn’t drive her through some terrible trauma and if she’s given enough time to calm down, she just might turn into a decent lady. She definitely has the intellect/processor to do that.